Infatuated with the bittersweet, syrupy allure of the Aperol spritz, Americans have rediscovered a taste for aperitivo and digestivo bitters. Enter amaro. While Campari is the ruby red king of bitter aperitivi, other darker, herbaceous digestivi have resurrected in it’s wake, ready to tackle cocktail menus and bar carts across the country.

But the history of amaro goes back. Waaaay back. And in cleaning my great grandma’s house my grandma found a cardboard box of amaro from yesteryear. You see, my great grandma didn’t drink. Her amaro stash grew from generous house guests who graciously brought a bottle upon each visit. Stubborn enough to not indulge in a drop but kind enough to hold on to each bottle, my great grandma unknowingly bestowed a treasure trove of flavors unto me. Thanks Grandma Maria.

Now normally I would not condone eating old food. Don’t eat the candy you found in your closet from a Halloween of yore. But properly stored vintage alcohol? Dive in. A barrel aged bourbon develops its unique flavor because of age. A vintage red wine has subtleties that a younger wine has not yet developed. Not to say all old alcohol remains drinkable, proceed with sensible caution.

I realize I’ve been drinking this stuff for a while and have no idea what’s in it. Oops. Each one is different, ranging from sweet like caramel to bitter like licorice, with unique secret recipes like mystical potions. Some even taste medicinal.

I’m lucky to have two vintage amari in my house: Amaro dell’Etna and Cynar. Amaro dell’Etna‘s ingredient list contains orange peel, licorice and vanilla. The recipe dates back to 1901, but is still available new in sores today. Cynar, a name derived from the latin botanical name for artichoke, is surprise surprise made of artichoke along with 13 other herbs and plants. Younger than Amaro dell’Etna, Cynar debuted in Italy in 1952.

The bitterness makes them adequate swaps for bitters in classic cocktails. Each unique blend also can suffice as the base for a contact and/or enjoyed on it’s own or with seltzer. The versatility alone makes a no-brainer case for keeping amaro in your home bar. Don’t worry, there’s one for everyone.

Is old amaro safe to drink?

Short answer, yes. Finding a bottle of Campari from 1950 is an incredible feat for negroni aficionados. But proper storage can make or break a vintage. Like Campari and Cynar, liqueurs don’t need to be refrigerated due to the sugar content. Approach vintage vermouth, lillet and any other fortified wines with caution. Opened or unopened, when exposed to light and heat, fortified wines can lose umf.

Where to store vintage amaro?

To reiterate, amaro’s sugar content keeps it shelf stable. So room temperature storage should not be a problem. However, take caution when drinking an old amaro that’s already been open. While oxidation won’t harm you, it will impact the thickness as the sugars turn into glycerin. It’s just a recipe for meh amaro experience. Best to keep vintage amaro unopened and out of direct sunlight until ready to drink.

What happens to the flavor?

The resulting flavor of aged amari varies greatly between styles. Additionally, due to changes in machinery and ownership, while ingredients might be the same every time, amari can vary between decades as well. Flavor can become sweeter and more syrupy or mellow as the bitter herbs meld together further. It’s an adventurous way to taste beyond switching between styles of amaro. Trying today’s version of Cynar, for example, alongside my beloved found bottle can showcase how the flavors evolved over time.

I’m not ashamed to admit that I’ve had an infatuation with vintage alcohol labels for a very long time: the art nouveau styles of absinthe ads to the futurism era Campari posters shaped my appreciation for the liqueurs. The text and colors of these labels tell so much about when they were conceived. The Amaro dell’Etna, with an older formula, uses embellished text and a painted landscape paying homage to a classic style, while the Cynar label uses block text and a modern design ringing in the 1950’s idea of the future. While both labels now reflect the past, each exists in its own era forever, reflecting the art and sentiment of each era.

Cocktail connoisseurs and vintage collectors can appreciate the impact these liqueurs have had on the culinary and advertising worlds. If you aren’t lucky enough to inherit a dusty cardboard box of amaro, you can taste older bottles at specialty wine shops and cocktail bars. If you’re curious to try an amaro at all, the next time you’re interested in an Aperol spritz at the bar, ask for one with a different bitter liqueur instead.

I hate it when someone tells me something is overrated after I express interest in going. Let me find that out for myself. Or not. I felt that way about Two Roads Brewery in Stratford, CT.

Two Roads is Connecticut’s largest brewery occupying 10 acres of land for brewing, tasting, entertaining and growing. Pretty impressive. The building’s post-industrial aesthetic and the collection of branded Air Streams gave the OG Two Roads an injection of 2010s zeitgeist. The tattoo event and french fry food truck added to that millennial vibe. So yeah, I guess if you’re over that crowd, then this place isn’t for you.

However, who cares what the place looks like when the beer is this good. Now, Two Roads is fun and the standards are abundant whether you like IPAs, sours or even hard seltzer, but if you want a wild time head over to Area 2, Two Roads’ experimental facility accessible via walkway from the brewery. While Two Roads might be perfect for tossing a frisbee, crushing a beer and dog watching, Area 2 is ideal for finding something rare and new.

In my 5-beer tasting I tried a farmhouse ale, a saison and a “hard kombucha” among the long list of uniquely funky and off-beat varieties. Of course, this is a lot of beer to drink without having any food so be sure to grab some cheese and crackers while you’re sippin’ and maybe pack a snack so you aren’t like us, waiting for french fries to sober you up.

Now for the run-down of all the beers:

These were only five of the 16 possibilities and you bet I’m going back for more. Area 2 can abduct me into their spacecraft of dope beer any weekend of the year.

Diamonds in the rough. Underdogs. After living in the Hudson Valley post-college, I ventured to those smaller places off the beaten path that promise personality and uniqueness compared to the busy hot-spots covered by big New York City publications. Though those spots deserve the coverage they receive and I adore them, let’s give it up for the little local spots that more than hold a candle to competition. 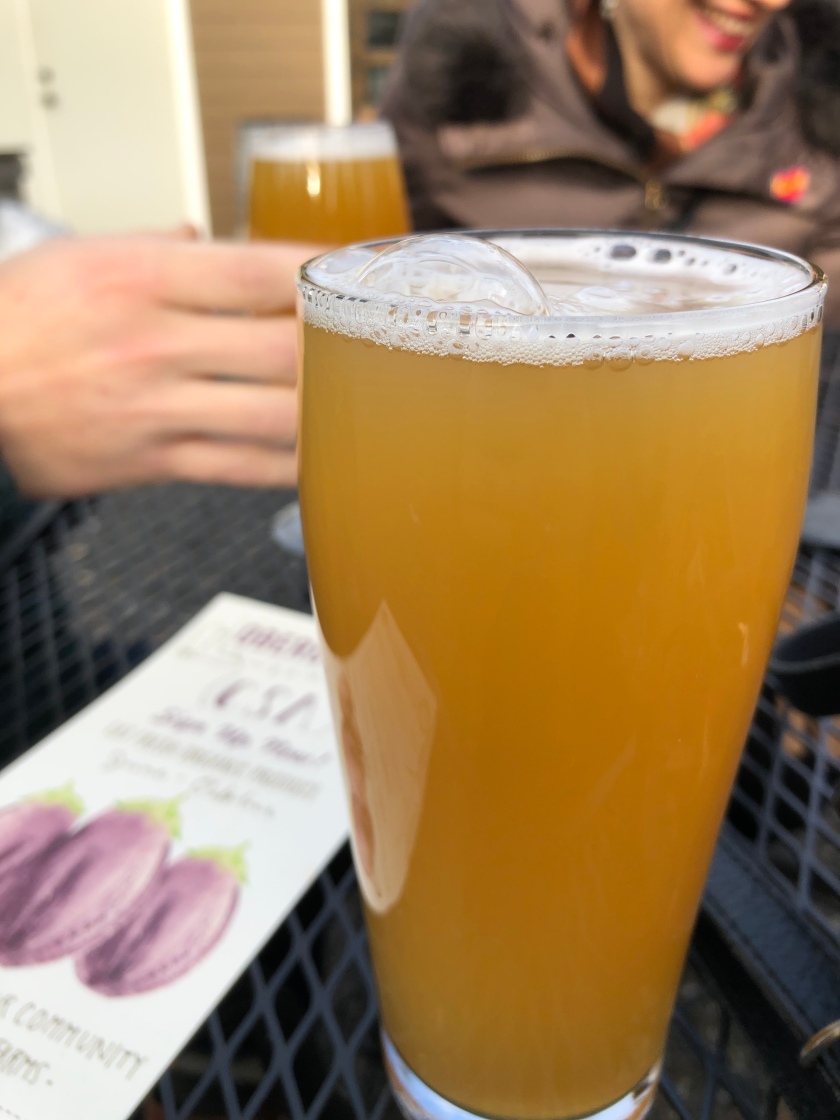 Located on Obercreek Farm, this brewery barely distributes which makes my proximity EVERYTHING. I first visited in the winter and remember the beers were deep gemstone colors. The style I tried was deep magenta and flavored with currants. The IPAs are refreshing and floral, unlike the bitter IPAs that I tend to avoid. Some beers are peachy and sour and some are thirst-quenching, but all deserve a taste. A newcomer to the craft beer scene, only in the game for just shy of 2 years, Obercreek is a contender against Hudson Valley Brewery and Plan Bee, two phenomenal breweries in neighboring towns.

Honestly, I thought this place was just called “dumplings.” From where it’s visible on route 9, the large block letters against the green background are all that’s legible. The exterior is underwhelming. It looks like a run-of-the-mill take-out spot. But there’s wizardry in that kitchen. Plates of steamy dumplings arrive, wrapped in the thinnest dough wrappers so the plate of 12 is manageable. The pork and scallion are classic, but the flavors get more interesting: lamb, egg and sour cabbage are only some of the options from multi-page menu. You’ll wait a long time on a busy night, but the result is worth the wait ten-fold.

Marcella’s perfect day: a hike to a waterfall, the best marg (@armadillokingston ) and my new favorite type of beer (@kingstonstandard ). The day continues…

I remember the first time we ever visited Armadillo. It was our first time in Kingston and we were hanging out at Rough Draft (a noteworthy spot) looking up places to eat. Stomach rumbling, I said “fine, let’s just go there.” Enthusiastic, right? I should’ve been. Hands-down the best house margarita, neither skimping on quality nor tequila. Portions are huge and of equally high quality. I remember the burrito I ordered fed me for days and I only craved more. The creamy green sauce served with chips? Life-changing. It’s just the perfect low-key spot meant for nothing but good times.

We all know I love multi-functional spaces. Maybe it’s from Alton Brown’s aversion to uni-taskers and my affinity for Good Eats. Regardless, this vinyl shop/bar combo is genius. The beer on tap is a mix of stellar local beers and in-the-moment craft brews. You want food? There’s a pizza window. There’s constantly good music spinning, creating the ideal ambiance for flipping through rows of vinyl. Not looking to buy? The arcade games are already loaded and ready for play. So yeah, you could go there, drink beer and play PacMan.

So I’ve only been able to visit this location once, but it’s somewhat of a seasonal treat. One crisp fall day we wanted to try some of the smaller cideries in the area. No offense to Angry Orchard, but we wanted a quieter experience with a different cider variety. This honestly came up in a quick map search while we were driving through New Paltz, and I’m so glad it did. The orchard sells donuts and apples, but the shack out back does cider flights. The seating area overlooks the beautiful Shawangunk ridge, an unexpected, breathtaking surprise, and the cider selection ranged from farmy to dry. Next time, I’d bring a blanket and sit outside overlooking the foliage all day.

I move out of the Hudson Valley in a week. It’s a bittersweet feeling, but I’m so fortunate to have been able to find these places and support the amazing work of the folks who put their whole hearts into a craft. Do me a favor and keep these places packed while I’m gone. Okay?